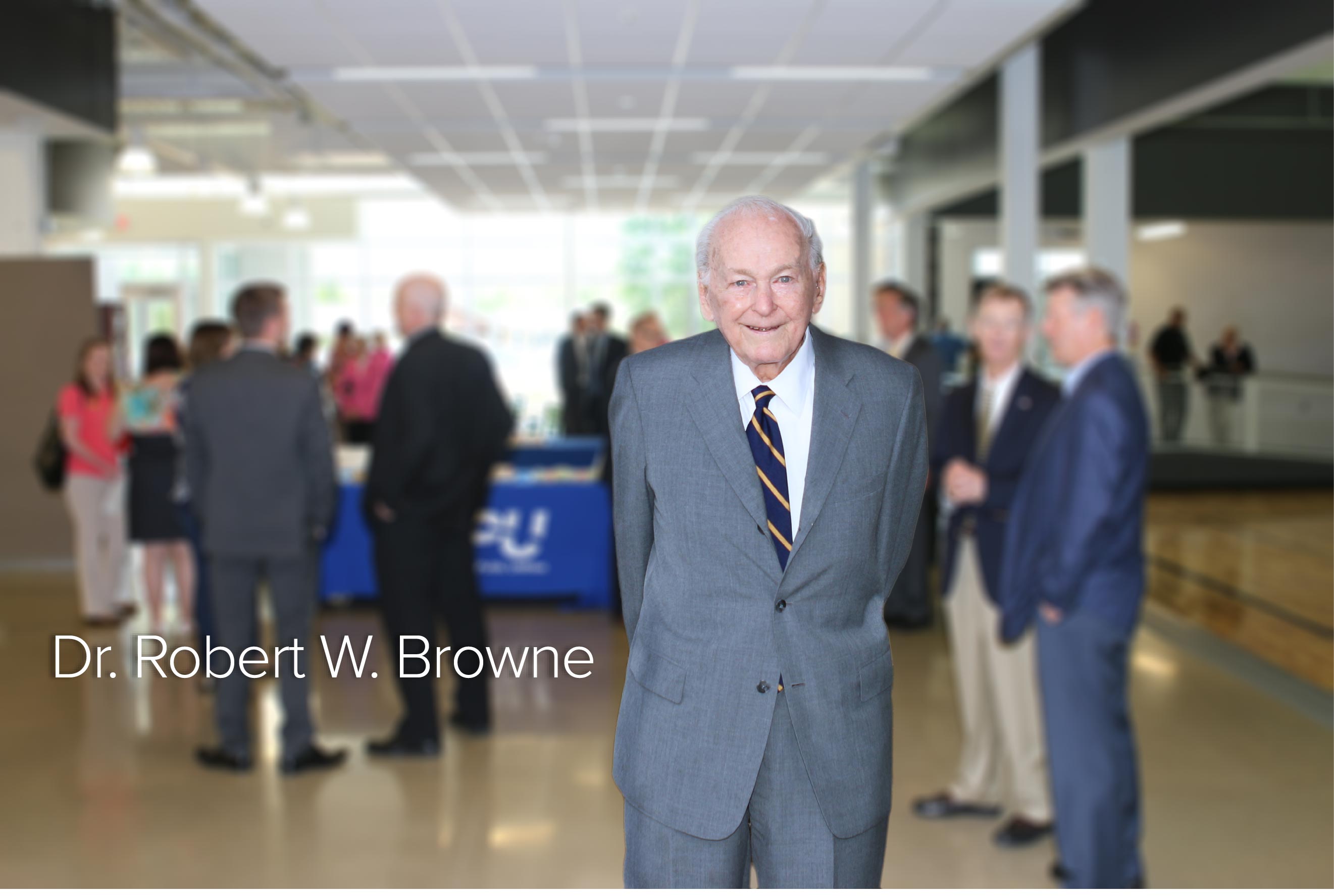 
Robert W Browne, D.D.S., was born in 1924 and raised in our community until he left for college. He was cared for, chiefly, by his paternal grandparents, Henry and Muriel Brown, who sacrificed to provide a loving yet modest home for Dr. Browne and his younger sister. As a boy Dr. Browne lived both in town and on his family's farm on Miller Lake Road in Batavia Township, where he attended the one-room Imber School with 17 students in 1st through 8th grades. His home at the farm had neither electricity nor plumbing.

Like his classmates in Coldwater schools and many others of his generation, Dr. Browne's life was profoundly shaped by two global events, the Great Depression (1929-1941) and World War II (1939-1945).

Dr. Browne responded to the financial challenges of his Depression-era childhood by developing his strong work ethic very early in life. He proved himself an accomplished self-starter with jobs picking potatoes for five cents a crate, cleaning and running errands for a men's clothing store for 10 cents an hour, delivering the Coldwater Daily Reporter on his bicycle, and working at the then-Standard Oil gas station. Yet he seldom missed a day of school because he knew education was key to building the life he envisioned.

During his senior year at Coldwater High School, Dr. Browne's leadership was recognized by students in all four classes when they elected him Mayor of the student body. Following graduation, Dr. Browne enrolled at the University of Michigan. However, like many people his age, Dr. Browne's college career was interrupted by World War II. He joined the Army Air Corp 41st Squadron, along with numerous other brave pilots, and was awarded the Air Medal for "courageous service."


When the war ended, Dr. Browne returned to the University of Michigan and completed his Bachelor of Science degree. He then enrolled in and graduated from the university's Dental School, where he also received an advanced degree in orthodontics several years later.


Dr. Browne and his wife, Lynn, were married for more than 60 years prior to her death in 2013. Together they had four children and six grandchildren. They have given generously to numerous organizations including the University of Michigan, Aquinas College in Grand Rapids and Mrs. Browne's alma mater DePauw University in Greencastle, Indiana. However, no community has been as touched by the Browne's generosity as Coldwater.

To honor his grandmother, Muriel, Dr. Browne gave a gift to renovate the entire Coldwater United Methodist Church in 1997. In 2002, he donated funds to build the Henry L. Brown Municipal Building in honor of his grandfather, a grocery clerk who served on the City Council from 1938 to 1942. It's an interesting coincidence that this prominent building sits on the site of the former Standard Oil gas station where Dr. Browne worked as a boy. His most recent gift to our community is the Dr. Robert W Browne Aquatic Center and Recreational Center.

Dr. Browne is an American success story who never forgot his roots. He continues to be a loyal friend to the members of his Coldwater High School class of 1942. We are most grateful that he also so generously demonstrates his lifelong values of tradition, humility and education by honoring his grandparents and supporting his hometown - Coldwater, Michigan.

$14 Million Dollar Gift to the City of Coldwater, Michigan


Dr. Robert W Browne, and his wife Lynn, made the financial commitment of funding up to $14 million dollars for a major expansion of recreational facilities within the City of Coldwater. The project included an aquatic center on the grounds of Legg Middle School, at the corner of Bishop and Western Avenues as well as a major expansion of the Heritage Independence Recreation Gymnasium.

With the gift from Dr. Browne, the Heritage Independence Recreation Gymnasium more than doubled in size. It now includes a multi-purpose floor that can be used for basketball, volleyball, tennis, soccer and other community activities. The facility also includes an indoor walking track and community rooms.


"Recreational activities relate to quality of life for a community, and this will be a huge asset and positive impact to Coldwater," said Tom Kramer, Mayor of Coldwater. "We cannot emphasize enough how appreciative we are to Dr. Browne for this generous gift to our community. The economic impact of this project will be felt in every industry. Community recreation is one of the top areas that businesses and families look at when relocating to a new community."

Dr. Tina Kerr, Superintendent of Coldwater Community Schools stated, "The addition of an aquatic center is momentous for our school district. We intend to use the resources of the facility to provide birth to senior therapeutic and recreational programming. We are so privileged to have a Coldwater graduate think so highly of his education and childhood that he gives back in a way that will impact our students for decades to come. This is more than an aquatic center; this is a community center for everyone to use."

Coldwater Community School Board President Robin Iveson noted, "Our students will have year round access to facilities that will provide them with healthy activities that build their skills and self-esteem. This is a huge step from a fitness standpoint, not to mention the social and team building opportunities for our school district."

The City will be collaborating with Coldwater Community Schools to operate both facilities and provide enrichment programs which will benefit both students and community members. The project was completed in early 2015.